An interactive data tool launched by WHO reveals for the first time the current and future financial cost of health care for women living with conditions caused by female genital mutilation (FGM). 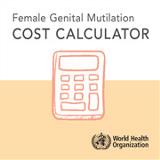 The FGM Cost Calculator is being launched on this year’s International Day of Zero Tolerance for FGM. This new tool shows that if FGM were abandoned now the associated savings
in health costs would be more than 60% by 2050. This data, available for 27 of the 30 countries where FGM is practiced, will strengthen the economic argument of community activists, policy makers, programme planners and donors working to end this
human rights violation.

FGM includes procedures that intentionally alter or cause injury to the female genital organs for non-medical reasons. More than 200 million girls and women alive today have been cut in 30 countries in Africa, the Middle East and Asia where FGM is concentrated.
[1] An extreme form of gender discrimination, it is recognized internationally as a violation of the human rights of girls and women: including the right to health, security and physical integrity and the right to be free from torture and cruel, inhuman
or degrading treatment.

FGM has no health benefits and causes only harm. Women and girls who are subjected to FGM are at risk of both short- and long-term negative health consequences – including for their physical, sexual, mental, and social well-being.

The direct financial cost of treating the negative health complications caused by FGM can span generations, starting as early as childbirth. This puts a significant economic burden on health systems and national budgets, especially in countries with rates
of FGM greater than 10%.

Until now, there have been limited data on the financial costs associated with FGM, making it hard to demonstrate the cost-effectiveness of programmes and policies that can prevent FGM by 2030 – a global priority in the Sustainable Development Agenda.
The new WHO Cost Calculator now provides an economic argument which can be used by those advocating for an end to FGM.

Users of the new FGM Cost Calculator can choose a country and identify current costs of treating health conditions caused by FGM. Since the tool is interactive, it produces bespoke graphs showing the potential amount of money saved if FGM is prevented
by a selected percentage.

If no action is taken to prevent FGM, it is estimated that related health costs will soar by 50% by 2050, as populations grow and as more girls undergo the procedure.

The FGM Cost Calculator combines data on health risk associated with FGM, health costs and national FGM prevalence to analyze the economic impact on national health services of treating the consequences of these harmful practices.

Health risk data were taken from a WHO database created for this analysis, pooling all available information from systematic reviews of health consequences of FGM. The following categories were used, each with a biological link to FGM: gynaecological,
obstetric, urological, mental and sexual, as well as the immediate health complications that can result following the cutting.

To be included in the calculator, a health condition needed to show evidence of increased risk when comparing women with and without FGM. It also needed to have a treatment which could be implemented and costed in the health sector.

Health costs were calculated from the WHO One Health Tool and other data. The financial burden of treating selected health conditions was calculated at a national level.

A strong case for investment in preventing FGM

Rates of FGM have declined over the past 30 years, but not fast enough to keep up with population growth. If trends continue, the number of girls and women undergoing FGM will rise significantly in the next 15 years, in turn raising national health care
costs of caring for them.

Additional resources are urgently needed to scale up interventions that can prevent FGM in the future and reduce health complications.

By providing quantifiable numbers on the cost of treating health conditions directly linked to FGM, for the first time, the FGM Cost Calculator can be a crucial tool in building an investment case for a future where no girl or woman is cut.